September 22, 2015—An Andalus Dairy Factory representative stands behind a counter selling Andalus dairy products at one of Safeway’s largest branches in Amman, Jordan.

The growth of micro and small enterprises (MSEs) is vital to Jordan’s economic development. Creating demand-driven partnerships between MSEs and lead private sector firms such as Safeway represents a huge growth opportunity for MSEs and provides them with new sources of revenue and a chance to improve the quality of their products.

Small local business majorly increases its revenues as a result of a connection to larger business facilitated by USAID.

The Andalus Dairy Factory, operated by the Cattle Farmers Society in the northern governorate of Irbid in Jordan, was a struggling commercial entity until it was taken over and transformed by a Syrian businessman in 2013. Despite selling its products in bulk to local grocery stores and restaurants, its growth was still limited due to constraints such as the small size of the local market, lack of connectivity to other markets in Jordan and lack of know-how regarding food quality assurances required by larger retail  businesses. 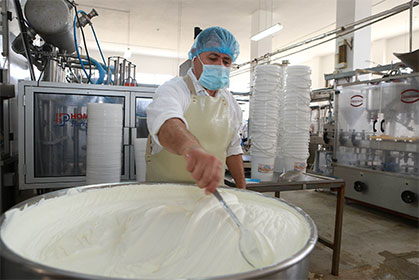 In early 2015, the USAID Jordan Local Enterprise Support Project (LENS) facilitated a connection between the Andalus Dairy Factory and Safeway, one of Jordan’s leading national supermarket chains. The aim was to create new linkages for this small dairy factory that can lead to growth and access to new markets. Right away, Safeway was impressed with the superior quality of dairy produced by this small local business. They signed a deal with Andalus to purchase fresh dairy products such as cheeses and labneh (a popular type of strained yogurt) and started selling them in two major branches in Amman by fall 2015. Customer feedback on Andalus products has been very positive. “If Andalus has the capacity to increase production, Safeway is willing to expand selling its products to other branches across Jor-dan, says Safeway Jordan’s General Manager Dr. Laith Abu Hilal.

“Previously, Safeway had only one exclusive fresh dairy supplier, so we are entering a new market where there is a strong and established competitor,” says Andalus Dairy factory owner Ammar Azzam, “Some challenges still remain but we are very happy and proud to have been given this opportunity to compete with well-established businesses.” USAID LENS is continuing to provide the dairy factory and other MSEs with training and technical assistance to further improve the quality of their end products and distribution mechanisms